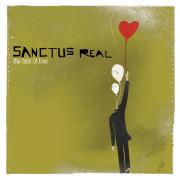 With just two albums and four years under their belts since signing with Sparrow Records, the lads of Sanctus Real have already tasted more critical and popular success than most groups do over the course of their entire careers. Their major-label debut, Say It Loud, netted the Toledo foursome two Dove nominations, Best New Artist honors from CCM Magazine and the highest first-week sales figures for any debut rock album in the Sparrow catalog. And rightly so, given its irresistible amalgamation of guitar-driven classic rock and tuneful modern pop. Likewise, the five Top 20 songs from the Modern Rock Album of the Year-winning sophomore outing, Fight the Tide, were most surely a product of that record's heightened musical and lyrical diversity and the band's escalating proficiency with studio technology.

While many a thriving quartet would have been content to stick with that which brought them to the present point, a good portion of The Face of Love points to a group determined to take the proverbial road less traveled. The magnificently wistful tone of the mesmerizing, indie-pop-inclined album opener, "I'm Not Alright," is a noticeable sidestep to the bristling, arena-ready pop/rock textures of the first two efforts. The ethereal Coldplay-tinged title track marks a similarly pronounced detour from the All That You Can't Leave Behind-era U2 which inspired Loud and Tide. And songs like "Possibilities" and "Don't Give Up" serve up just enough less-than-obvious chord progressions and tempo variations to distinguish them from the songs on the first two releases.

Its admirable stylistic depth notwithstanding, the new album manages to catch fire only intermittently. Tracks like "Thank You" and "Fly" sound like they were recorded very early in the morning by a band not fully awake. The likewise lackluster "Where We Belong" features most of the outward accoutrements that rendered previous radio singles like "Everything About You" and the U2 cover, "Beautiful Day," so appealing, but lacks those songs' buoyancy and underlying sense of conviction. Indeed, even when front man Matt Hammitt delivers his vocals at a near shout, the music behind him only rarely goes beyond sounding politely subdued.

Lyrically, the album is similarly patchy. The gripping leadoff cut, "I'm Not Alright," ("Can I lose my need to impress / If you want the truth / I need to confess") is blessed with a refreshingly stark forthrightness. The language of the title song ("I may not know the shape of your face / But I can feel your heart changing mine") is equally heartfelt and sublime. Elsewhere, though, the clever wordplay of songs such as "Eloquent" (I'm as eloquent as an elephant / About as head strong as the mighty King Kong) borders on the precious. And cuts like "Don't Give Up" (Don't give up on love / And throw it all away) and "Possibilities" (Remember the day / We ran away / We drove through the night / To those big city lights), while encouraging enough in their outlook, still come up short thanks to their clichéd wording.

In fairness, the circumstances surrounding the creation of the third release were less than ideal (bassist Steve Goodrum exited the band after the second album, and drummer Mark Graalman's father died in early 2005). Likewise, even though the lion's share of the new project comes across as somewhat listless, songs like "I'm Not Alright" are instilled with a piercing sense of longing that renders them among the group's most affecting works to date. Love's experimental nature strips it of much of the infectious melodicism that made Loud and Tide such winning affairs. That said, hats off to Hammitt and his colleagues for shaking things up a bit rather than playing it safe and turning out a carbon copy of the first two releases. A difficult record to marvel at, The Face of Love is, at the same time, an easy one to admire.