Once Upon a Shattered Life - Seventh Day Slumber (2005) 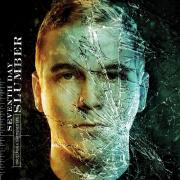 I'm not as much of a hard rock fan as I used to be. After watching countless bands rise to semi-celebrity status, I've become quite picky with my selections. As countless bands continued to follow the footsteps of Creed in sound and production, I threw in the towel.

So what draws me to Seventh Day Slumber, a band who could arguably sound similar to everything else on the market? I'm drawn to the brutal honesty reflected in rough, unpoetic lyrics. I'm drawn to the heavy guitars and baritone vocals. I'm drawn to perhaps the most important aspect of this band-their hearts. Seventh Day Slumber is not just a musical endeavor seeking to entertain kids to death. This band has created a sophomore release geared to the child on the brink of emotional collapse. Once Upon a Shattered Life takes the pain dissected in Picking Up the Pieces and offers a solution to the brokenness.

This is a universal pain, where the claws of a dark past overshadow a promise for the future. "Break Me" discusses this struggle; the speaker condemns the internal and external forces hindering him from moving on: "I'm on my way / And I'm not falling / You're all the same / You try to break me down." Screams erupt, powerful enough to address voices both in the past and present. Let the listener be aware: the truth will be confronted in this album through emotions experienced by every seeker of reality. It is a prologue for change, because "when the smoke is gone / I have to face what I've become" ("Shattered Life"). In "Shattered Life," heavy guitars and piano exist alongside pleas to leave a destroyed existence. It becomes an interesting musical turmoil of wanting to stay and wanting to move. After chaos comes the tender "Caroline," a peaceful composition sung over a girl wanting freedom from a present hell. Reminiscent in music to Creed's "With Arms Wide Open," Joseph sings, "Let me wipe away your tears and give you life / Make you feel beautiful again." The line "I will always take you back" brings up images of the prodigal son; the song becomes God singing to His lost ones. Caroline becomes you and me. She exemplifies the church gone astray from her most passionate lover. A sense of security rests in this track, for the past cannot hold Carolines apart from the Savior.

In trying to get the message across, Seventh Day Slumber leaves pretty prose to the emo kids. Instead, the band hits your speakers with pounding power chords, stellar solos, and deafening drums. "Break Me," "Make Believe," and "Chris' Letter" represent classic power rock-chunky with enough watts to satisfy any mosher. They then calm the pulse through tunes like "Masquerade," "I Believe," and "Brand New Man." Here the guitars proceed with care, and the drums remain steady background decoration. Their focus is to keep the songs straightforward and solid-let the music pound and the lyrics hit simply and immediately so they may be understood without a lengthy analysis.

The song that speaks to me as a worshiper is "Oceans From the Rain." A vintage keyboard opens the song, perhaps a bit more emo than normally seen by these guys. Yet when the hearts of these men are compared to major emo bands, all evidence will point to Seventh Day Slumber and say that this group owns the larger heart. "Oceans From the Rain" contains more worshipful passion than many albums created for congregational adoration. Joseph sings, "And I'm amazed by You / Cause You're never far away / And all that I've been through / Your love has never changed / You make oceans from the rain / Breathing life into this place / And I will drown inside Your love / Until I see Your perfect face." It reads like a modern hymn and becomes a paean of praise whose profoundness lies in the fact that even a child could sing it.

The guys in Seventh Day Slumber may never grace the cover of CCM Magazine. They may never be eulogized for creating a new musical genre. But that's not the primary focus of this band. They instead picture the faces of their listeners and play to provide them hope. They seek to minister through the medium of music. "Oceans From the Rain" completes the album by citing the crux of our relationship with Christ: "The blood of Jesus can wash [our] pain away." As unfancy and unoriginal as that sounds, it shouts boldly, because it is truth, and Once Upon a Shattered Life is all about shouting truth.