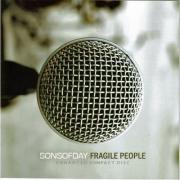 A quick glance at the liner notes to most Christian artists' debut albums usually reveals the customary roundup of church pastors, voice instructors and gear sponsors in the "thanks to" section. It is a rare band indeed, though, that can claim a debt of gratitude to the KGB for the recording of its freshman project. Such is the case, though, for Scottie, Bogdan, Roman and Vlad Bellos, whose grandfather, Joseph, first became interested in Christian matters after reading a Bible he'd confiscated from an elderly woman during a KGB literature raid in the former Soviet Union.