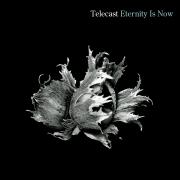 Having grown up in the church, I've sung my fair share of songs written about "the sweet by and by." I've listened to sermons about the streets of gold. I've read the Biblical accounts of the heavenly gates (not just pearly, but decked out with twelve kinds of semi-precious stones). But I've wondered how we can live in the "here and now" in an effective manner. I don't want to see this life on earth simply as a time marker until we get to heaven.

This is why I find Telecast's new record, Eternity is Now, so refreshing. Frontman Josh White (the only original Telecast-ian) believes eternity begins here, on planet earth, the moment we hand our lives over to Jesus and surrender to His Lordship. At that moment we die, and at that moment we live in Christ, therefore we live within eternity itself. "Fade Into You" dissects this transformation: "I've been born again / You've transformed my heart and entered in / Yes, I've been born again / I'll fade out and You fade in / To me." It can be quite esoteric when one ponders the concept of living within the dimensions of eternity while seated at your computer reading an album review, but it can also be exciting. While the actual place of heaven cannot be fully experienced until physical death, we can catch glimpses of its perfection when the Creator lives in the center of our hearts.

Since eternity is now, each song reflects this concept. The lyrics do not deny the hardship of life on earth ("There are days that are dark, and I'm scared / Days I just fall apart"); instead they showcase a balance: "But You are there / I will remain in You" ("Saturate"). This album becomes a waltz between the hardships of humanity and the glories of deity. When the two coincide in one life, the dance is stunning.

"Fade Into You" not only reflects this theological concept, but it weaves an intricate musical pattern. It opens with ethereal guitars and keys, then the drums kick in, and a gripping lead guitar line strings the track together. Then it lightens for White's smooth vocals and soothing acoustic guitar. It holds a similar flair to Beauty of Simplicity (their debut recording), but it also reflects the Northwest musical style found in bands like The Listening. It sounds very indie, managing to rise above the Coldplay comparisons they received with their first effort.

If one were to hear Eternity is Now from a distance, it wouldn't sound like a worship record. This is not the cookie-cutter image of worship music as a genre in the CCM scene. This is not Mercy Me or SONICFLOOd repackaged for a different audience. "Today" holds a melodic line semi-reminiscent of a Beatles tune. "Everything" showcases a straightforward piano arrangement to coincide with the simple yet powerful lyrics: "No matter what this day will bring / I will lift my hands and sing / Be my everything / I'll make my life an offering / In You alone I believe / Be my everything." "Your Wounded Feet" incorporates a slide guitar and still manages to avoid being classified as country. Yes, there are a few moments like the cell-phone-ring intro of "Closer to You" and the harmonies circa old-school Newsboys in "Today" that might have been better suited in another band, but they don't detract from the finished product.

A prayer in the front jacket reads, "Help us to understand that eternal life is not a distant hope, but communion with You, right now in this moment." Eternity really is now, and it really can be reached as we embrace Him. Telecast has returned with an album that might not be popular with CCM radio stations, but it just might reach a different audience of Christians who were looking for unique expressions of worship music. No one can deny the distinct intellect and creativity that went into making this album.