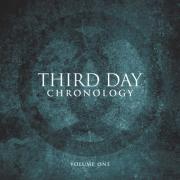 As unlikely as it might seem to more recent converts to the Third Day fold, time was when lead singer Mac Powell and his cohorts rocked more fiercely than just about any other artist on the Christian music charts. Indeed, newcomers whose only exposure to the group is through latter-day singles like "Cry Out to Jesus" and "Mountain of God" may be shocked to learn that the outfit's first few records were described as a cross between Lynyrd Skynyrd's down-and-dirty Southern hard rock and the arena-ready post-grunge of artists like Pearl Jam. Indeed, Powell's voice was so often likened to that of PJ front man Eddie Vedder that the 3D cooperative often broke into "Yellow Ledbetter" during their early concerts as a tongue-in-cheek nod to the comparison. Drawing from the band's first four albums and a 1999 EP, the first Volume of the Chronology series focuses on the fivesome's rock and roll roots.

Perhaps surprisingly, nearly a third of the tracks on Chronology come from the quintet's first release. This is hardly a bad thing, though, as the imbalance actually works in the compilation's favor. Indeed, from the gutsy Southern rock of "Forever" and "Nothing at All," to the imposing grunge-inclined undertones of "Consuming Fire" to the tender balladry of "Love Song," the eclectic debut set a high-water mark that the group has yet to surpass. The collection does a nice job of cherry picking the high points from the second record, including "Who I Am," an engaging slice of modern rock whose darker, confessional tone and harder edge mirrored the bulk of the Conspiracy No. 5 album from whence it was taken. Likewise impressive is the stirring, gospel-tinged "Have Mercy," which stands toe to toe with anything on the first album.

Backing away from the melancholic air that pervaded Conspiracy, the Time album was a slightly more accessible outing featuring "I've Always Loved You," a stellar country-rock cut and one of the group's most affecting compositions, presented here in a new mix with more prominent steel guitar. The equally poignant "Your Love Oh Lord" highlighted the band's capacity for creating genre-defining modern-day worship choruses on the order of Rich Mullins' "Step by Step" or Twila Paris' "We Bow Down." 2000's Offerings, a live/studio hybrid and the group's most commercially successful release to date, is represented by a pair of tracks - "King of Glory," a beautifully sublime entry which hinted at the adult-contemporary pop the five-piece would investigate wholeheartedly in the new millennium, and "Agnus Dei," a towering take on the Michael W. Smith classic that manages to equal, if not exceed, the venerable original.

While the abovementioned songs range from solid to outright inspiring, Volume One's non-album tracks are far more hit and miss. "She Sings in Riddles" and "Long Time Comin'" are absolute revelations for those who missed them at the time of their inaugural outing on the limited-edition Southern Tracks EP. To be sure, "Long Time" possesses a swagger that surpasses even that of the most spirited entries from the first album. And the heart-rending countrified timbre of "Riddles" shows just what the group was aiming for, but came up just short of hitting, on much of the Time release. The new recordings of "Thief" and "My Hope Is You," by contrast, are superfluous at best and near travesties at worst, with the buoyant, speeded-up take on the former stripping the languishing piece of its intended poignancy, and the energizing electronic percussion and AC-friendly tones of the latter all but obscuring its underlying sense of melancholy and longing.

Longtime devotees are likely to be enticed by the inclusion of live versions of "Blackbird" and "Alien," although these cuts differ only minimally from their studio counterparts, save for their slightly muddier sound quality. Conversely, even some casual listeners whose only exposure to the group is via the weekly Christian music countdown will notice the exclusion of radio hits like "You Make Me Mad," "Never Bow Down" and "These Thousand Hills." That said, the first volume of the anthology includes nearly all of band's most familiar earlier songs. And those in search of truly rare material can delight themselves with the bonus DVD which boasts audience-recorded concert footage dating back to 1992. Offering something for everybody - from neophytes wondering what all the fuss over the Third Day collective is about to faithful followers looking to remember what the group sounded like before they sanded down the rough edges and took up residence on the adult contemporary charts - the generous, well-constructed Chronology Volume One serves as a marvelous summation of the gifted band's first half decade together.