Music Inspired by the Chronicles of Narnia - Various Artists (2005) 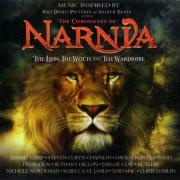 A companion (or alternate) piece to the original movie soundtrack, the Narnia Inspired By album features eleven newly-written songs from an assortment of popular Christian artists. For the most part, those involved stick to that which they know and do best. Jars of Clayâ€™s â€œWaiting for the World to Fallâ€ is an engagingly wistful slice of harmony-rich modern pop recounting youthful wonder lost. The eminently spirited â€œNew Worldâ€ shows TobyMacâ€™s dexterity with both hip-hop and grunge to be little diminished since his glory days with dc Talk. The falsetto vocals on â€œOpen Up Your Eyesâ€ lend Jeremy Campâ€™s characteristic guitar-driven pop/rock a mesmerizing, almost haunting quality. And even Kutlessâ€™ by-the-numbers acoustic post-grunge hits the mark on â€œMore than It Seems,â€ thanks to the groupâ€™s skill at forging instantly-memorable hooks and melody lines.

A handful of the performers opt to venture outside their comfort zones. â€œStrongerâ€ shows UK Brit-poppers Delirious? admirably taking on psychedelic-tinged Beatlesque pop. Similarly, â€œI Will Believeâ€ finds Nichole Nordeman trading her inspirational adult contemporary-leaning pop for a shimmering R&B/alt-pop hybrid that stands among Narniaâ€™s most transcendent entries. And modern worship artist David Crowderâ€™s splendidly tongue-in-cheek â€œTurkish Delight,â€ with its wah wah-laden guitars, soaring string flourishes and dance-friendly rhythms, sounds like nothing so much as a lost nugget from the golden age of disco â€“ a comparison only furthered by its gloriously abandoned cries of â€œThe more I have / The more I want!â€

As with so many â€œinspired byâ€ releases, the better portion of the tracks on the Narnia disc could be argued to have, at best, a tenuous connection with the movie they represent. Taken on their own merit, though, they do their authors exceedingly proud, nearly to a song. Indeed, while only a few of Narniaâ€™s entries represent a marked musical departure for their composers, the majority of the material on the project equals or betters that written by its contributors for their own records. What the Narnia Inspired By effort admittedly lacks in inventiveness, it makes up for in accessibility and uniformly strong material. Surprisingly cohesive for a multi-artist collection, the Narnia record is one of the more solid movie-related albums to hit the shelves in some time.