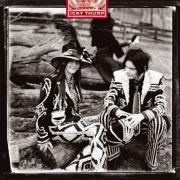 There is a dichotomy inherent to the White Stripes that more than one observer has grasped, and the dichotomy is essentially this: its members are misfits who manage to fit in.

For some time now frontman/guitarist Jack White and drummer/vocalist Meg have made music that would be at home in the indie ranks but has no business emerging to have large-scale commercial success. Yet few bands with any measure of staying power have attained equal popularity.

The story of the White Stripes is that of a group that has gone from being locker stuffing to point of making friends with jocks and cheerleaders - without losing integrity to the things that made them locker stuffing in the first place.

This marriage of indie sensibility and commercial viability remains intact on Icky Thump, the band's most recent offering - but it shows signs of bending slightly toward the latter. In the past, there have been hits, but rarely has White Stripes music been stuff that you can groove to, or that has much of a groove in it. Much the opposite is true here.

Song titles like "Catch Hell Blues" and "300 M.P.H. Torrential Outpour Blues" betray the influence of the Delta on this collection, and the lyrics of "Bone Broke," though laid over conventional electric rock riffage, are quite similar to what might emerge from the standards of Robert Johnson or Muddy Waters. A blues album this is not, but elements of the blues are very much part of the mix.

"Conquest" serves as a departure from this, telling the story of a philandering man's victim who becomes a philanderer herself in a tune that sounds like it could come from a mariachi band, if only mariachi bands were permitted to use amplifiers and electric guitars.

More typical fare is the easy-bopper "You Don't Know What Love Is (You Do What You're Told)," which paints a cynical view of the dynamics of a supposedly "romantic" union, and the brilliant ode to lost innocence "Little Cream Soda," which begins with frenetic instrumentals and smoulders like a down tempo Nirvana tune during the verses.

True gems are found in the Celtic-infused "Prickly Thorn, But Sweetly Worn," and album closer "Effect and Cause," whose lyrics are by far the album's most profound. The essence of the message is found in the closing lines of the first verse: "first comes an action/And then a reaction/But you can't change 'em around for your own satisfaction."

Later, Jack sings the following by way of example: "I ain't the reason/That you gave me no reason to return your call ... if you're headed to the grave/You don't blame the hearse."

"I'm Slowly Turning Into You" is another strong track, chronicling and commenting on the process of profound annoyance and eventual acceptance of the other that most marriages endure. "A Martyr For My Love For You" is another winner, featuring nuanced guitar work an infectious beat courtesy of Meg that sounds as though it could easily be coming from The Roots' ?uestlove.

As stated, Icky Thump preserves the dichotomy of the White Stripes, but represents a small step away from the group's patented weirdness toward more easily-digestible fare. It is safe to say many of these tunes will be wafting in through the radio in the coming months, and certainly many are deserving. Many, in fact, are exceptional.

One wonders, however, if future songs will continue this trend, and if in doing so the Stripes will lose its dichotomy, and with it the distinctiveness that previously made them simultaneously hateable, loveable and unique.