All is right with mewithoutYou 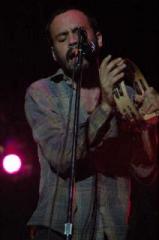 Never before have I seen such a peculiar band. Not in a bad way; rather, in an innovative and just plain different kind of way. With brilliantly-formed lyrics, experimental music, and singing/shouting vocals, they definitely set themselves apart. The first time I saw mewithoutYou perform was when they headlined Purple Door Festival in 2007. They brought a feeling of uneasiness, yet extreme confidence to the crowd of a few thousand. During our recent interview, Mike Weiss, mewithoutYou's guitarist, shared that their sound is "Just a little weird. I don't know; it's very hard to handle sometimes, but you get it after a while." For some reason, I believe that band members would depict the music and their ambitions quite differently. The only way you can really describe this band is to listen to their record or attend a show yourself.

In fact, a lot about this band appears to be up for individual interpretation - and it's a trait that they seemingly strive for. It all began with their name. Their friend Matt had created the name previously in hopes that it would one day be used, and they asked if they could have the honors. Much to their delight, he said yes. "This name was simple and I liked that about it," Mike recalls. "It sort of suggested a separation, a very simple idea, but you couldn't really pinpoint who was the ‘me', or who was the ‘you'. It wasn't set in stone; just very simple, beautiful." So unlike what I had always thought, the "You" may or may not stand for God.

Fortunately, what is set in stone is the release date for their newest full-length titled, it's all crazy! it's all false! it's all a dream! it's alright. On May 19th the highly-anticipated album will hit shelves and online downloads will be available, much to the excitement of devoted mewithoutYou fans. This time around, the band chose to focus heavily on the vocals, and employed a singer/songwriter style when first writing the songs. "Aaron [Weiss, vocalist] did a lot more singing," Mike shares. "It's the same because it's still Aaron up there singing about stuff that he cares about, which is always something to do with God, something to do with being in some dumpster, or on a train hopping somewhere." With the strong focus on vocals, it allowed the musicians to be able to experiment much more with each of their parts. "It was fun - it was a lot more fun that writing Catch For Us The Foxes. It gives the vocals free reign to not have to compete with anything, rather than the other way around."

Despite singing about "something to do with God", they would rather avoid being associated with the Christian music scene. "I don't care for that term really," Mike admits. "Ultimately, if you're on Tooth & Nail [Records], you play Cornerstone every year, people are going to say that about you. Let them do it. I think it's a little obtuse, but whatever." This possibly draws doubt on the common perception in the Christian music scene that the "You" in their name stands for God. But then again, they're all about interpretation.

As for the future? There are talks of a music video in the works - one involving puppets. And also, "Aaron and I are talking about putting together a little band to do a tour in August, a real little one. I don't know what we're going to do it as," Mike reveals. So be sure to check out their website and MySpace pages for tour dates and glimpses of the upcoming video. Their CD release show takes place in Philadelphia, PA on May 23rd. That will be something you don't want to miss! And, back by popular demand, mewithoutYou will be performing at this year's Purple Door Festival (www.purpledoor.com).