A Chat With Relient K 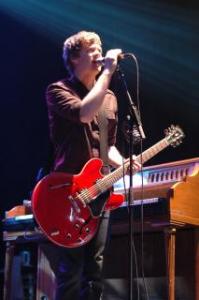 At my local stop of the Appetite for Construction tour, I sat down with Dave Douglas, Jon Schneck, John Warne, and Matt Hoopes of Relient K in the catering area of Stabler Arena in Bethlehem, PA, while the crowds began streaming in for an early show on November 16, 2007. Later, Matt Thiessen joined us. While there are no definite plans for an upcoming record release, we still found many topics to discuss in this exclusive interview.

inReview: Last time I sat down with you, Brian was with the band, and it was snowing. We were at the Electric Factory during the See Spot Rock tour. It has been a while since I sat down with Relient K. Can you give a synopsis of what has happened since then? Obviously there are two new band members here.

Dave: We have new records and new band members and a new label since then. And new merch.

Jon: New guitars and Dave has new shoes two days ago. John got a new car. That’s it. Everything else is exactly the same, I think.

Matt H.: I have a new baby. So as far as the band goes, a lot of new things. From shoes to babies.

inR: Let’s take the record label. How has that been different?

Matt H.: We signed to Capitol Records in 2004 right before our last record came out. It kind of was a smooth transition. It was almost like a verbal agreement because both Gotee and Capital are owned by EMI. It just kind of transferred over. All the money was going through the same corporate account anyway. So it kind of just worked out the same and being with Capital, they have given us a lot of opportunities that I don’t think we normally would have gotten. Like we were able to do the Warped Tour, we were able to play on some late night TV shows. Just get a certain kind of exposure that I don’t think we would have gotten with Gotee. And just different opportunities and we have had an enjoyable time with them so far. To be able to make bigger records and just have fun. But really, as far as their involvement goes, it is similar to less than we were having with Gotee. 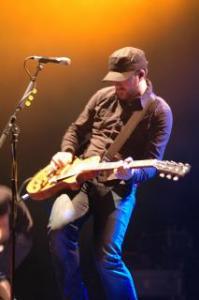 Matt H: Vitamin water – kiwi strawberry right here. It has Vitamin A plus lutein. That’s a good question. Currently Eddie [the bus driver] drives Relient K. He makes sure we stay between the rumble strips every night. No, I think with every new record there is always this kind of desire to make a better record than the last one. Better sounding, better put together songs. And we try new things all the time as far as recording. Trying to just extend the boundaries of what we are used to doing. Just trying to have fun and make music that we enjoy. I think that is what keeps it going. And the fact that people continue to come to our shows. That definitely keeps us going.

inR: Explain what you meant by “extend the boundaries.”

Matt H.: Take a song like “Death Bed” or something like that. It is just something our band has never done before. Like to do more things that are just different. [At this point, frontman Matt Thiessen sat down at the table and the band asked him to introduce himself.]Matt T.: I’m sick.

inR: What is your favorite part of this tour so far?

inR: Well I mean you aren’t allowed to say Switchfoot.

Jon: Well, that was my answer.

inR: Ok, you can say that if you want.

Dave: What am I not allowed to say?

inR: Switchfoot is your favorite part of this tour.

Dave: Well, that is the answer. My favorite part of this tour is being with Switchfoot because we have known those guys for a really long time and we were able to tour with them once before but that was like six of six and a half years ago. And both of our bands have gone through a lot of changes since then and we really only get to see those guys during the summer for the most part. You know, run into each other at a summer festival for the most part. So it has been really really cool to see those guys every day and hang out a little bit and share a performance space with them. It has been excellent. 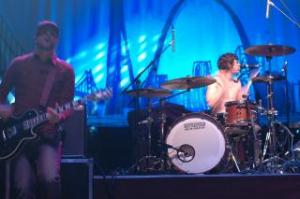 inR: Where do you see music and musicians, record labels and all that kind of stuff going in the next five years?

Dave: It is hard to see music. I mostly hear it. Do you see it, Jon?

Dave: Do you want to talk about the future of record labels.

Matt H.: It is kind of hard to speculate on the music industry. I kind of have this theory that at some point in time there is this young kid out there who is going to graduate business school and just be like, “Wow. You guys have been doing it wrong this whole time. This is how you do it.” And he is going to make himself billions of dollars and everyone is going to copy his idea. That is my idea of what is going to happen.Matt T.: You should be that kid.

Matt H: I should be that kid. I should go to college and make something of myself. Immediately. Yeah, I think it is hard to speculate. I mean you definitely see people buying less music but people still enjoy music. There is still a market for it. I think they are going to have to figure out how to sell something other than CD’s.

inR: If you could start Relient K over again now with the way it is right now, what would you do differently?

Matt T.: We would not have a career. If we were starting the band right now, as things are, the music industry is a lot less friendly to developing bands. I mean you have to have all of your crap together from the get go otherwise no one is going to pay attention to you. I mean even just to get somebody to buy your record you pretty much have to be like the new hot thing at the moment. I mean if you look at the only rock and roll bands that are selling records right now, you’ve got Paramore, Plain White T’s, and Fall Out Boy. And they are all kind of on the same record label and stuff like that. It is almost like, I don’t know, to be that band you have to have that buzz going right now. I think it is really hard for a lot of bands to start out right now. But thankfully for us, we were given seven years of growing time and hopefully we can continue to keep our fan base. I think that is the goal is to hold on to the people that dig your music and keep them interested because I don’t think anybody is going to be taking over the world any time soon.

inR: As you guys are growing and expanding your horizons with different songs, how do you keep your fan base? I mean, sometimes people say, “I don’t like their music any more. It is different.”

Matt H.: You kind of lose either way because if you make the same record eight times in a row, a lot of people are going to be like, “I have already heard this. This is boring. I know exactly where it is going. It is what it is. And there is no change. Why would I continue to buy the same record?” I think there is a healthy balance of bringing new things in while still keeping some of your roots of what you started out as being. We attempt to do that, I guess. 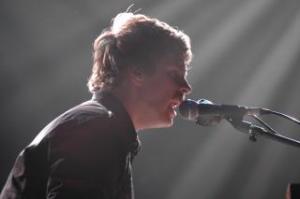 inR: What are you working on? What is next for Relient K?

Matt T.: We are going to start writing some new stuff. We are talking about maybe putting out a B-sides and rarities record, too. But we don’t know yet. 2008 is a mystery right now. It is the 2008 question mark.

Matt H.: It is the unknown.

inR: Is that a cool thing? Are you excited?

Matt T.: Yeah, I am excited. We are almost done with our record deal. That is a good thing. We’ll see what happens.