The Confessions of Pillar 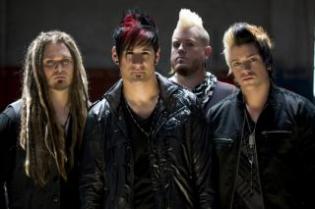 During this year’s Purple Door festival, inReview caught up with Pillar for a few minutes aboard their air-conditioned tour bus. (A much appreciated break from the weekend’s heat). As we heard the female-fronted band, The Pledge, take the stage behind us, we were able to delve into the minds of the four band members and pick their brains about the past tour, new members, and an upcoming CD release.

Later that night we witnessed the crowd intensify as Pillar began their set. With such a great live show and dedicated fans, only greater things could possibly be in store for this hard rock act. Listen in on what they had to share, and be sure to pick up their new album when it drops on September 22nd, 2009.

inReview: What gave you the idea for the Confessions Tour and cards?
Rob: There was a series that my church went through a couple years ago called “My Secret” and they did a similar type thing. They also had an online confessions area. I talked to somebody at our church about bringing it on the road. We set up a confessions booth on the tour and took that philosophy out on the road with us.

inReview: How is Confessions different or similar to your previous records?
Noah: Well, musically it’s still reminiscent of old school Pillar but it has a lot of new, modernistic tones.
Rich: Yeah, a lot of new words like ‘modernistic!’
Noah: It’s definitely a lot more modernized. Its definitely more big rock and a little less riffy. The drums are huge, the bass sounds phenomenal, Rob’s vocals are amazing, exquisite, superior.
Rob: The writing process was different on this record. But overall, the ultimate similarity is that I’m still singing. If you put the Confessions record with our very first record it wouldn’t even sound like the same band. Every record has changed, evolved. Rob Gray produced this record so just having a new producer brought it to a whole different level and perspective. 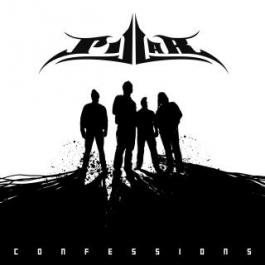 inReview: The majority of songs on this album have already been dubbed ‘radio friendly’ – were you striving for that when you began the songwriting process?
Rob: It wasn’t necessarily an intentional process. We started off with like 36 ideas and we picked the ten songs that are the best, the catchiest ones. If radio friendly is what they want to call it, then we’re fine with that.
Noah: We’ll see you on the charts!
Rob: We’ve always been a rock band, and we still are. There are still heavy songs on there, and we’ve always had ballads. There’s a lot of bands in the world where they have a radio hit, but the rest of the record doesn’t sound a thing like it. Hey, shame on radio for not letting them play more of our songs.
Taylor : It’s the beginning of a new era, too.

inReview: What led to the new lineup, and picking Rich for bass and Taylor for drums?
Rob: Well actually, I was on craigslist.
Noah: We looked for bass players and he [Rich] worked for the cheapest. And then under the free drummers and that’s where Taylor was.  [Laughing.]
Rich: Nah really, it wasn’t an ad. I went to the same church for a while and then Noah and Rob showed up and started going there so I got to know them through that. I’ve played with a lot of Christian artists – been doing it since ’99. Something happened that I couldn’t be with the person [band] I was with, and they couldn’t be with the person they were with anymore and it all just worked out. It couldn’t have been orchestrated any better.
Taylor: I drove all night to audition. And it was totally worth it. It’s weird. I never knew, when I was standing on the side of the stage watching these guys play a few years ago when I was in a pop/punk band, that I’d be in Pillar a few years later.
Noah: What’s cool is that the formula [lineup] has changed numerous times and it just gets better every time. Each equation is equal to a big step forward. Some bands get a new drummer, singer or bass player and all of a sudden they just fall off.  But musically we’ve really grown in the past twelve years.
Taylor: I think now it’s Pillar!

inReview: What’s a question that you haven’t been asked, that you’d want to be asked? Cause you know, people always have to ask that question.
Noah: Well I’ve never been asked that before!
Rich: What’s your workout regiment, Taylor?
Taylor: Oh man. Well, I always get Myoplex 17 gram protein shakes. In case EAS is interested in giving me an endorsement…
Noah: Unfortunately, they won’t hear this interview.
Taylor: Well let’s see, Rich - I wake up, I lift a shake out of the fridge and I drink it like this.
Rich: Do you curl it?
Noah: How many sips do you get out of that?

inReview: How has the way you connect with fans changed over the years?
Rob: We used to be the band that record labels talked about and said, ‘Do it like Pillar.” There literally were meetings about modeling after Pillar’s street team. What happened was a surge of online communities that took away the focus of what we were doing. We’ve had to rethink about how to re-engage the fans. While taking about this new record a key point was re-engaging those core Pillar fans. The label wanted to change our logo and they gave us one option. We have a staple logo that people just know. So we put it [the new logo] out there and people were saying “oh that’s awful.”
Rich: “We’re not buying the new record…”
Rob: Yeah, so we went into the label and said “this is what people are saying.” We put up a poll over a weekend and at the end of the weekend there were over 3,000 votes. Over 90% of fans said to keep the old logo. So the label said “Okay, we will.” The fans are just jacked up right now. There’s some people that are so excited that I thought they were going to like drive down, find our houses and give us hugs…What we’ve done in the past is one thing, and this is a new opportunity. We’ll see how it goes!

** special thanks to Kim for help with this interview!**