eleventyseven: The serious and the fun side of a new pop-punk band 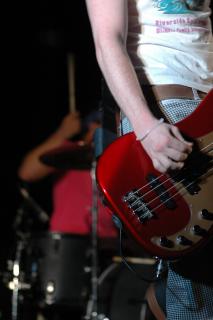 When I strolled over to a small but well decorated merch table to meet eleventyseven for the first time, I did not know what was in store for me. This was the opening band on the "This is Your Anthem" tour, headlined by Superchic[k]. The low band on the totem pole, so to speak. My interviews tend to involve people that I have met previously or experienced live at least once. I am not sure what led me to choose this young three-piece pop-punk band from Greenville, South Carolina. Perhaps it was the fact that "More Than a Revolution," the first song released to radio earlier this year, seemed a bit different to me than many of the endless bands whose music comes across my path.

One by one I met Matt Langston (lead vocals, guitar), Caleb Satterfield (bass), and Jonathan Stephens (drums). I experienced their fun side. Soon we would sit down and chat and I also became acquainted with their serious side. In the end, I knew why I was meant to converse with this band. I hope you will see that as well as together we get to know eleventyseven better.

And the Land of Fake Believe, which released on Flicker Records/Sony on May 16th, is the band's national debut. Eleventyseven has maintained a full touring schedule and in the four years they have played together, expanded beyond their southern state Bible belt roots to the East Coast. And with three independent releases, this band is not new to music.

Langston, not only the lead singer, but also the primary songwriter, was the first to describe their brand of music. "Imagine a little child walking though a massive living room full of breakable stainless china, and also there is a mousetrap in the middle of the floor. The kid walks over to the mousetrap and there is a little gusher sitting right in the middle of the mousetrap. He sticks his finger in there, and it snaps on his hand. And he is screaming at the top of his lungs. He starts running around trying to fling this little mousetrap off the end of his little finger, but he can't do it. He breaks all the china in the room."

"Or just the more aggressive side of pop-punk," Stephens quipped. 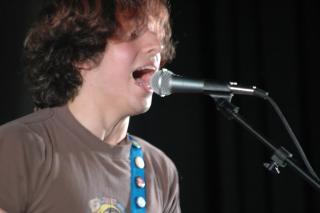 The band cites musical influences such as Blink 182, MxPx, The Petshop Boys and Flock of Seagulls. Lyrically, the songs originate as life experiences - different struggles and trials. "A lot of times just looking back on reflection and just having a big laugh on how dumb you were when you were younger," Langston recounts. "Learning from your mistakes and realizing just how not cool of a person you are and how not seriously to take yourself."

The band hopes that their music would be a happier record than what is being put out now. "That it would somehow be a little bit more colorful and perhaps joyful," explained Langston. Stephens added, "We want to tell kids [that] we enjoy life and we are thankful with the life that God has provided for us. We want kids to know that you can love God. I mean, I know so any miserable Christians." Langston further added, "There is more to life than what you are going through right now. The different problems that you have, no matter how massive that they seem right now, in the big scheme of what the Lord has planned for your life, they are not big."

Digging deeper with perhaps some specific life experiences in the back of his mind, Langston added, "The concept of time demands that we have faith because we cannot see the future. We cannot see what is going to happen. And we are not in control of those things. And when we try to take control of those things, that is when we begin to stress out about things and not focus so much on what the Lord would have us to do but on controlling our own lives. And we just can't ... That is what we want our record to do."

Eleventyseven is not new to taking their show on the road, yet opening for a major tour does have its differences. Langston explains, "We get to eat more than burgers — there is food in the rider now." Of course, while good food may be important to these men, they all agreed that meeting new people was more of a blessing. "We get to meet a lot of really cool people. A lot of awesome bands that have a heart for ministry and we get to partner with them in their ministry. We all get to work together with these common goals." 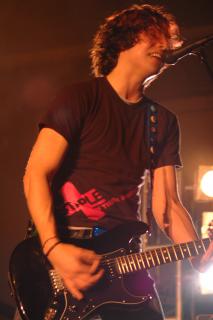 While the response to this new band has been good, the tour was not all joy and happiness. "We have had kids say that they love it, and we have parents come up to us like, 'Why are you guys doing this? There is nothing godly about your band. There is nothing "Christian" about what you guys do,'" Langston comments. "I guess the adversity is giving us a little edge to say that we are persecuted. [Laughter] But I mean everybody has different preferences and opinions about music."

After talking with these three for a while, I knew they had wisdom beyond their years. So this is where I decided to bring of my favorite subjects to bring to the table. Mainstream versus "Christian" music. I began the discussion with a mention of one of my youth group students who told me that her parents would not let her listen to music unless it the lyrics were obviously "Christian' because otherwise it would not be glorifying to God.

Langston quickly added his take on the subject. "There is absolutely no such thing as 'Christian' music. Music is sound created by people, regardless of how you make it. Other people will go so far as to say you either have 'Christian' lyrics or you don't have 'Christian' lyrics. And then I would say, 'Well, what really makes a Christian a Christian is the way their heart is.' And that should come out in what they have to say and in the music that they play. But you cannot pigeonhole people in a certain genre like Christian music and then expect them to be perfect. Like you cannot expect every song that they write and every lyric that they write to be so profound that speaks directly to you."

Perhaps pondering the lyrics Langston put forth in And the Land of Fake Believe, he added, "Different things minister to different people and a lot of songs we have may not even mention God. But it documents a time in our life when we can look back and see how the Lord was working through that. And hopefully it can be an encouragement to someone else." 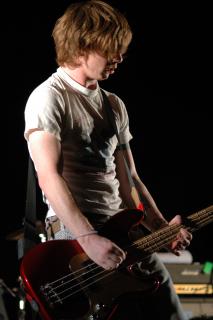 I then put forth one of my favorite questions, asking, "If you could take away the distinction between mainstream and Christian music, would you? Why?" Obviously answering yes without saying it, some good points beyond the question were mentioned here. "There are a lot of secular artists that get a bad rap for things that they do, but seriously have it a little more together than a lot of people who claim to be 'Christian' artists do," Langston answered.

In the end, it was evident that eleventyseven is in this business to contribute music that is on the happier side of things. "The whole hard core, screamo, emo, indie scene right now is really depressing," Langston said. "We all have struggles and we all get depressed sometimes. Hopefully we can contribute some sort of happiness."

If you have a chance to see this three-piece live, I would encourage you to meet them, even if you are not a fan of their music. They are fun. They are serious. But more importantly, they have something straight from the heart to say to whomever will listen. And don't forget to tell them I say, "Hi!"