How A Local Church is 'Facing the Giants'

Facing the Giants is a gold mine. That's not because the movie will win any Oscars, or because its take on the Inspirational Sports genre is all that original. It'l be a success due to the story behind its making. And the fact that many people will hear the story thanks to a providential publicity campaign (no pun intended).

Perhaps you're like me: Christian films aren't your cup of tea. After seeing Facing the Giants recently and speaking with a few members of the production and marketing team, I believe this one is at least a quality film families will enjoy — and, more importantly, presents a model for making movies that most churches and ministries haven't considered.

Publicity and the Cynics
Getting USA Today, Entertainment Weekly and even Congress talking about an independent Christian film is unheard of. 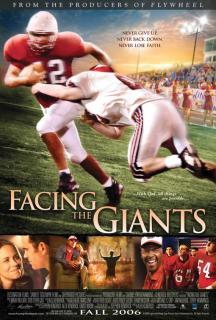 So was it only a promotional tactic that got Facing the Giants, a family drama releasing Sept. 29, so talked about? It certainly seems so with posters using the headline "Rated PG for Christian Content", but the ratings incident wasn't exactly planned according to Kris Fuhr (VP of Marketing for Provident Films).

"We expected to get a PG rating for the infertility plotline that's in the movie," Fuhr said recently. "But when the rating came back 'Rated PG for Thematic Elements,' I asked my co-worker at Provident to check on what those elements were. We'd be talking to pastors about Facing the Giants, and they'd want to know the MPAA's concerns of course."

"I was forwarded an e-mail thread between Provident and the MPAA, and couldn't believe it. They decided that the movie was heavily laden with messages that preferred one religion over another, and that this might offend people. It's important that they used the word 'proselytizing' when they talked about giving this movie a PG." As to the publicity firestorm, director Alex Kendrick said, "It started by accident. We did one story with Terry Mattingly, which The Drudge Report picked up, and bam! We were hit with two dozen interviews in a day." (Look for CNN and 60 Minutes to run major stories on Facing the Giants closer to its theatrical release.)

People shouldn't hear in this a group of Christians crying foul over the ratings system — it's a tribute to democracy that the U.S. is one of few nations where film ratings aren't regulated by the government. These filmmakers want only to be heard in the marketplace of ideas. So what's this story behind the making of Facing the Giants, and is the movie itself any good?

The Making Of
In 2002, a local church in Albany, Georgia got a hold of George Barna's latest research. The study found that Mass Media Reaches More Adults With the Christian Message Than Do Churches, "And that bothered us," said director Kendrick. At the Denver preview, Kendrick was introduced not as the director, co-producer, co-writer and star of Facing the Giants; rather, his claimed the title "Associate Pastor of Media" at 3,000-member Sherwood Baptist Church.

Back to 2002: Sherwood opted to get into the movie business. They raised $20,000 to create Flywheel, a two-hour film that Sherwood only wanted to get into their local theater. "It ran for six weeks and was the 2nd highest-grossing film during that time period," Kendrick said. Now Flywheel is available in every Blockbuster in North America; the film's website reports that 24,000 copies of the DVD have been sold.

With one success behind them, Sherwood Pictures was about to get ambitious. They raised $100,000, church staffers Alex and Stephen Kendrick wrote a script, and 500 church members committed to help out. The church enlisted Carmel Entertainment to help guide them through the large-scale production process, as well as pitching Facing the Giants to a distributor. Sherwood's goal was to get the film in 30-40 theaters in their region.

Then the unexpected happened. Provident/Integrity Distribution had the rights to a Third Day song the Kendrick brothers wanted to play in the film. "What do you mean, your church made a movie?" Kendrick said they responded. "Send us a copy and we'll see." What Kendrick didn't realize was that Provident Films, owned by Sony, would send the DVD up the chain to Samuel Goldwyn Films. Who really liked it. So it is that Facing the Giants will release in over 400 theaters on September 29 — a film with a real-life pastor in the starring role, football players from the church's Sherwood Christian Academy playing themselves (essentially) and hundreds of church members serving as lighting crew, crowd extras, et. al.

Run-of-the-mill, or a Cinematic Revival?
Expectations being what they are, Facing the Giants met mine better than Cars or Pirates 2 ever did — though take into account I'm a big fan of Jack Sparrow and Pixar who expected a lot of those summer flicks.

Certainly Facing the Giants pours on the sports clichés. Here we have a team in a years-long slump that starts the season 0-3. In one scene, parents of the players are seen in a late-night, backroom meeting scheming to take out the coach. And, yes, two play-by-play announcers are there to heighten the drama in the team's Last Big Game.

Producer Jerry Bruckheimer used these same elements when he made Remember the Titans on a $30 million budget. So give the Kendrick brothers a break; the clichés come with the genre.

Harder to swallow are the hard turns the plot takes. The first 45 minutes are a fine set-up of a small town, a Christian academy with a struggling football team, and a married couple with normal, small-town problems (for instance, the coach's dying car is played to great comic effect).

Then the coach has a personal awakening. General audiences might accept this: the typical Hollywood dream sequence is replaced by a five-minute repentance/prayer/soul-searching montage that's not poorly done. Thanks to character development, a strength of the film up to this point, only a few will want to walk out.

One hour into Facing the Giants, the school experiences revival. The model of revival is certainly biblical: students huddled in prayer, giving testimonies, sharing their sins and receiving God's forgiveness. And the setting is a private Christian academy, not a public school (otherwise the ACLU would step in and we'd be Facing the Giant Laywers during the movie's second half.)

Maybe audiences will know that a church made this film and can appreciate the on-screen revival. Without question, it preaches.

The Little Moments that Inspire
Facing the Giants makes up for its weaknesses with moments that will motivate even the most passive of moviegoers. Some small scenes I recall: before the head coach halftime speech, the three coaches strategize the second half (which adds an edge to the "we're all in this together" mentality, more so than Denzel bravado); and there's a coy husband-wife conversation in a flower shop where he announces his turnaround.

Impassioned acting and razor-sharp tension are the hallmarks of the Death Crawl sequence, the most compelling five minutes I've seen in a long time. This was why I had to ask Alex Kendrick, the director who also plays Coach Grant Taylor, "What is your acting training?" "Uh, Flywheel," he responded — a reference to the church's first film. Suffice to say, it's an impressive scene for an independent Christian film.

The film's iconic image is that of a crippled father giving the "field goal" sign to his son: arms raised up, hands outstretched, though still he is confined to his wheelchair. Never has faith in spite of pain been personified so well and so simply. And, like real life, some things (like the father's ailment) aren't dealt with or healed in the two hour running time. "Still I praise Him," the character says — a message we can all take to heart.

Is it "any good"? Definitely some. If nothing else Sherwood Baptist Church gives us some important ideas to consider, in a form that will last a lot longer than a Sunday sermon.