Inside the world of Phil Keaggy 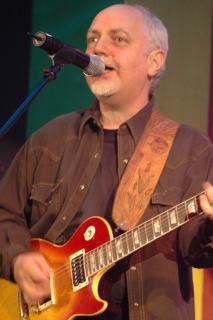 In the world of guitar players, there are mortals and there are gods. Many would tell you Keaggy is closer to being the latter than the former, especially among Christian guitarists. He serves a higher power, of course, but few would deny his greatness. Needless to say, our interview with him was easily our most anticipated at Gospel Music Week, 2006.

When we sat down with him for the first time in inReview's history, we wanted to talk about his music, but at first Keaggy had something else on his mind. Sitting near him was an iPod with a small microphone hooked attached to the top of it. We wanted to use it to capture the greatness that is Phil Keaggy, and it turned out that Keaggy had done the same thing himself.

So we pursued the issue a little further, and he gave us a few thoughts on how the development of his music has changed over the years. Then the interview began in earnest, however, as he told us about what he would change in the CCM industry that all but ignores him and by rights should perhaps be his to rule.

Perhaps July 4th, the release date of his project, Jammed!, came and went, without a speck onto your radar screen. On the other hand, perhaps you are a huge fan of Phil Keaggy's musical talents and got the album as soon as it was released. Or, maybe you are someone in the middle. No matter where you may fit please read on to hear some insight from a man who has stood the test of time in the CCM music business.

The first actual question of my interview in some ways led to a Back to the Future discussion. "If I had the knowledge and the brains I have today back when I was in my twenties, I would have been a better businessman," Phil pondered. "I would have tried to make it so that I ended up with my catalog and not somebody else." Phil has released close to fifty solo albums, both vocal and instrumental, as well as eight releases with his band, Glass Harp. Yet, much of his music is out of print, unless you are willing to pay an arm and a leg on an online auction site. Phil wishes he could simply buy a duplication machine and send copies of any album to whoever asks.

"I imagine someone would step up to the plate if they knew they could sell 100,000 of them. But it is just the few people who know about me, anyway. It is like supply and demand, you know. Of course we live in a world where there is musical congestion everywhere."

Perhaps Phil could have taken a path where he would have sold 100,000 units, or even 50,000 units. Phil admitted, "I wish I could have been a little bit more dangerous with where I went with it and perhaps tried to reach out a little bit more to the world. It was easy to be booked in Christian venues as a Christian artist for Christian audiences." In general, that is where Phil has stayed. But he has no regrets. "On the other hand, I have tasted the other side, too, and it is no party ... And I don't mind singing to the choir. The choir needs singing, too, once in a while."

Phil's admits that despite his long-standing career in music, it can sometimes cause him to be jaded. Now he understands that when he signs on the dotted line, it is not always as one dreams it to be. "Which is why," Phil claimed, "it is better to be an independent artist now than to sign your masters away. It does not have to be that way any more because it is a new time."

Phil continued, "I feel sorry for these people who have taken advantage of artists and writers over all the years. And giving them a real sour deal while making them think they are getting a great deal at the beginning ... Only to find out that the big budget that was being spent on their project is getting paid back by their small percentage of royalties."

Ultimately, Phil told us, the record companies own the masters. And not only is that a problem when albums go out of print, but, as Phil further explained, "Some of these writers, they wrote some of this music with tears in their eyes. Their heart is breaking. And those songs end up becoming assets."

So how does he keep away from jaded thoughts? "Read about world poverty or read about some things that Compassion is doing where it is about the kids instead of us and our restless views of the music business." We can all learn something from that comment.

He may not sell many thousands of records, but over the years, people have aspired to play the guitar like Phil Keaggy. But whom has Phil Keaggy aspired to either musically or lyrically? "Well I am pretty impressed with the way that Rich Mullins and Mark Heard wrote lyrics. I really appreciated Keith Green's passion. It is interesting that all three of them are gone from this world. Bob Dylan's talent for being avante-garde and dangerous and prolific. Paul McCartney's sense of melody has always impressed me. Even though he was never that giant of a lyricist. But his presentation - the whole package seemed to make it work." Phil continues, "But I think I aspired to be more like people when I was younger. Now I just want to aspire to be myself." 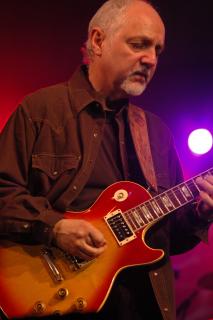 So what better topic to discuss next, but his newest project, Jammed!. Phil describes it as a detour or a little deviation in the road. "It is like driving down the road of life, â€˜Why not? Dairy Queen! I have not had one in a long time. Let's get a banana split'. It is not really going to feed your body. But it is going to be fun to listen to for a little bit. It may keep you going for those extra miles driving late at night."

This project is apparently an interim album, put out to pacify those who are saying, "Does Phil still play the electric any more?" Meanwhile, Phil is working on a vocal album. Phil claims, "Jammed! is just kind of a fun little thing. It has no message whatsoever. It is what it is. Because I know it is being marketed to Christian bookstores, I don't know what to tell them. I don't know what they are expecting from this but it is nothing that you are going to put on for devotions."

The album features never before released jams recorded from his early years to the present, and includes many of Phil's long time friends and collaborators. Whether you're a fan of Phil Keaggy or not, and even if you've never heard of him. Despite his desires to stay at home more, Phil still travels all over the US to share his craft, often selling out venues. Or if you can't get to a live show, why don't you consider getting your own copy of Jammed!

Listen to the entire Phil Keaggy interview in an upcoming episode of the inReview.net Podcast.