NOTE: This interview is also available on the inReview.net Podcast. If you would rather do so, you can listen to this interview (with a couple songs thrown in for good measure). 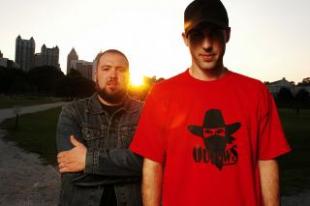 Patience is a virtue, so they say. On July 7, 2005, the news hit the Gotee Records website. "The new Mars ILL album, Pro*Pain, has been put on hold and will not be releasing on July 19, 2005. More details coming soon." Time passed, and details were scarce. So we sat down with Dust, Deejay and Producer, and manCHILD, mic (aka Mars ILL) the month before the long-awaited release of Pro*Pain to talk about the album. We also talked about hip-hop music in the CCM realm, among other related issues.

Imagine yourself in the Gotee Records suite (aka a hotel room) in Nashville, TN (aka "Music City") and join with us as we listen to the heart of these often (in our opinion) underrated musicians.

InReview: With the delay of Pro*Pain, you two released Pirate Radio and several repackaged releases. Did you do this out of pressure or were these actual products that you had coming down the pipeline and the delay simply sped the pipe up?
Dust: Ok, Pro*Pain was delayed, so [we decided] lets do something in the meantime. So we recorded Pirate Radio. We had not planned on doing it, no. It was more of a, "Hey we need something to kind of fill the void here."
manCHILD: We got a great response from Pirate Radio. After that it was like, ok, we are going to delay another year. And quite honestly it was kind of tough to push ahead and work on the next record. We were not sure when Pro*Pain was coming out. So I think that is when Dust put out the Backwaterprophets [disc] which is a remix of Backbreakanomics. I think we just tried to stay busy so we did not go crazy is one of the big things. So I am saying that Pirate Radio would have happened eventually, but it might not have happened so quickly if Pro*Pain had not been delayed. Because when you listen to that, you hear a little bit of the frustration of everything that is going on.

InReview: Can we get an update on when their next album will be coming out and why it has been delayed so much?
(Laughter.)
Dust: The first delay was a sample clearance issue. That was actually cleared up before the last delay. The EMI lawyers were concerned that there were other issues on the record, and they just said they were not comfortable releasing it as it is. And unfortunately, that meant destroying all 10,000 units that they had pressed. So that obviously caused the second delay.

Then we had to go back, rework a bunch of songs — basically to make the lawyers feel comfortable again.

manCHILD: I think right now as far as the next record, we are just going to see what happens with Pro*Pain and then move on from there. Dust has a side project he is doing with Sev Statik. I have a couple of unnamed things that I am working on. I want to see him do a producer record just because I think a lot of other people want to see it. I think I am certainly ready to start at some point soon. We are just waiting it out to see what happens. 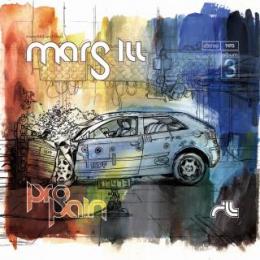 Dust: I think mentally for me, Pro*Pain has to be officially out for me to even — I don't know. It is almost just like a mental block. Pirate Radio was a different kind of release, not like Pro*Pain in the sense that...
manCHILD: ...we wrote and recorded it in like three or four days.
Dust: Pro*Pain was more of a culmination of all of our years of making music. To see that get out there I think will relieve a lot of tension that has been around Mars ILL for the last two years.
manCHILD: To us it is the strongest record we have made and I can't help but think that people are going to take notice of it. A lot of promotion was done, and it got kind of pulled back. So the machine is getting wound up again.

InReview: What have you been doing since the album was completed, besides the Deepspace 5 album?
manCHILD: Raising kids. I took a job for a while [and I] stunk at it. And various verses for other people and that sort of thing.
Dust: I did a Christmas album with one of our Deepspace 5 buddies. [It is titled] Just in Time for Christmas. I did Backwaterprophets which is basically a revamped Backbreakanomics from beginning to end.

InReview: Will there be a tour to coincide with Pro*Pain?
manCHILD: At this point we are working on some things. We are not sure what it is going to be. For me, touring is really taking a big backseat to life.

InReview: If you had your ideal tourmates, what would they be?
ManCHILD: De La Soul and Public Enemy. That would be a good one.
Dust: I guess somebody that would open us up to the fan base we have been searching for. I'd bet it would probably be a group like Public Enemy or somebody that kind of holds that classic sound. Because we kind of see ourselves as a throwback but with a little update.

InReview: What is the ideal fan base you have been looking for?
Dust: We have found fairly decent fan base, but I feel there are music lovers that don't necessarily know [our music] but would love it.
manCHILD: I think it is just expanding. Not that we don't love the fans that we have. But we want to tap into more people.
Dust: There are so many people that I think would enjoy our music that don't necessarily think they would even enjoy hip hop because they have a certain idea of what hip hop is. I would draw a lot of comparisons to the early rock and roll scene. It is more about the music and it is more authentic. I think there are a lot of people who would probably really enjoy a Mars ILL record. They just don't know it yet.

InReview: What is the meaning behind the wordplay in the album title?
Dust: It has kind of taken on a meaning — a lot of weight since the delays. Pro*Pain had a double meaning at first. The idea that Christ suffered for humanity, so we are pro pain. And also the idea that to do this on a professional level is painful. It is not all that easy. I mean, it is fun. I enjoy it. But at the same time it is not, "Do this, do this, and do this — success!"
manCHILD: And so we named it that and all of a sudden this crap happens. So the next album we will call Roses and Butterflies.
Dust: Easy Street.
(Laughter.)

InReview: Hip-hop usually comes from individuals that are oppressed and live relatively tortured existences. That's probably not true of you guys. Do you think the best songs come from happy places or sad or stressful places? Is it necessary to literally suffer for one's art?
manCHILD: I think some of the best hip hop songs both now and in the past — songs period - have come from people's personal struggles and personal demons, whatever you want to call them. People from all walks of life have those, whatever they might be. I think that when somebody gets a little more personal than you think they would on a record, or a little more personal than what is comfortable. I guess they show a vulnerability. I think that is what makes good music, hip hop included. When guys open themselves up a little more [it] really glues them to their fan base. And I think that is what we do.
Dust: I think pain is relative to your situation, too. Maybe a struggle in our lives may not be a struggle for T.I. or whatever struggles he went through.
manCHILD: Nobody is shooting at us.
Dust: Yes, nobody is shooting at us. But we are still squeaking by. My family does not have a huge savings. We are working toward the American dream. Yes, there is pain involved in succeeding. I think most of our writing comes from real life encounters. It is not like he is writing about something that he does not necessarily understand. And for me, passion is more what drives me. I just have a passion to make music. I think that is a very valid source. 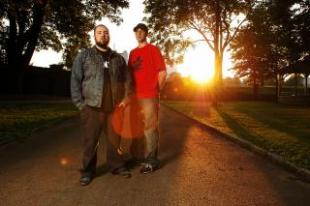 manCHILD: I think you see people around you suffering if they don't have a spiritual life. Their relationships are falling apart because they do not understand some really basic principles. And I think we can really speak to the heart of that. Luckily I do not come from a broken home. Luckily my parents are still together. I have seen the damages of divorce in my wife and her family. And really as a man had to deal with those trust issues because of what her dad did. And I think Dust is the same way.

So I think other people around us have struggles as well. A lot of time you only see the negative side of the pain. And we see the positive side of the solution in Christ. And at the same time [there are] the every day little struggles that you can share if that is your personal cross to not talk about it or complain about it, but to really just offer it up. I think it is an important part of life that we all kind of miss out on.

InReview: Where I live, a Progressive Rock radio station got taken over by an Urban music channel. Yet in the Christian music scene, that type of music is played on radio stations at like 11 PM on a Saturday night. How do you respond to that?
manCHILD: Well I think you do have the stations that play, (radio voice) "The hottest hip hop and R&B all day long." But really our type of music — your college market, indie-rap, whatever you want to call it — it happens late at night. Even at the college stations that play general market music. It is the Underground Railroad from 10 to 3 in the morning. It is not really drive time music in a lot of ways. That is when our shows happen. We usually hit the stage at 1 AM or later. So I mean that is when people are kind of in tune and listening. They are not necessarily listening on their jobs.

So that really does not bother me so much about the Christian music parallel to the general market because to us it is really apples and oranges in a lot of ways. Of course we would love to see love from the Christian music side because of our faith. But we are very realistic about it.
Dust: There is really nowhere for us in the Christian music scene right now. I mean there is just not a slot. There is no radio. Well except for RadioU. I wish there were fifteen of those and we would probably be a lot better off. But there is not. Unfortunately [the radio stations] cater to forty-something women. We would never succeed in that.
manCHILD: We just do not fit between Jars of Clay and Michael W. Smith. And I would not want to hear it. It would take away some credibility issues.
Dust: All that to say we will take whatever we can get. I know there are kids who are like me when I was in youth group who want something quality to listen to. But getting to them is a lot harder than getting to a secular market.