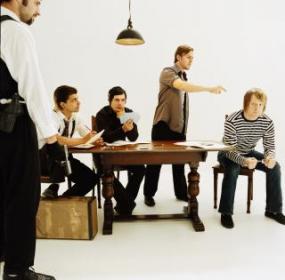 Approximately six years ago, The Classic Crime was born. This alternative rock band provides a little bit of musical brilliance for everyone. With a mixture of powerful vocals, great instrumental compositions and thought-provoking lyrics, this West Coast act is gaining national ground. "I guess we don't have many fans on the East Coast," vocalist Matt MacDonald shared before our interview at a meagerly attended New Jersey show, that also happened to be inconveniently scheduled on Father's Day. But if my estimations are correct, that fan count will soon be changing as they play a few large festivals this summer, including Cornerstone and Creation East.

Matt, along with Alan Clark (bass), Robert Negrin (guitar), Paul "Skip" Erickson (drums), and Justin DeQue (guitar), comprise the five-piece band. Listen in to what Matt had to share with inReview:

inReview: When and how did the band begin to form?
Matt: We got started in 2003. Some of the guys met at college, Skip and Justin grew up together and went to college outside of Seattle and they met Allen our bass player. They started writing songs together and put an ad in the free newspaper in Seattle called The Stranger for a vocalist. I was going to the art institute in Seattle at the time. I answered the ad, and the rest is history! We met Robbie at Zumiez in the mall and he hung out for a long time and after a while it was just like `Eh, he can play guitar!'

inReview: What was the motivation to start?
Matt: Justin and Skip were in bands before and I was in some bands in high school. I really wanted to be serious about making a career in music. I just wanted to write songs. When I met these guys, they already had a bunch of songs written and they were really cool so it just made sense. We clicked together musically and we all kind of dropped out of school at the same time and just focused on working really lame night jobs and practicing during the day. We took it seriously, and I was stoked to be in the presence of like-minded people who wanted to make a career out of this.

inReview: How did you guys come up with the band name?
Matt: We started writing different music and were a new band, so we wanted to change our name to something that you couldn't really stereotype. Those words just came together. They didn't really have any specific meaning, other than that when you hear those words you go, `Huh, I wonder what they sound like.' We could be a metal band, an acoustic band. That's kind of what we wanted - a name that you couldn't prejudge when you heard it. 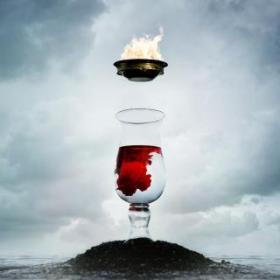 inReview: How is your newest album, The Silver Cord, (released July 2008) different or similar than previous records?
Matt: We think it's different because we can actually play our instruments better now, and we were able to play more on the record. It was less edited as far as technical terms…It's more free flowing, there's an ebb and flow with the rhythms, there's more depth with the tones, and I just think the song-writing is a little more mature. It's definitely a progression in the right direction for us.

inReview: Is there a theme that tends to run through your music?
Matt: The Silver Cord was our stab at a concept record. We don't really like to call it a concept record, but the concepts are in there. The Silver Cord is a metaphor for life and how fragile it is. It's this idea that's in mystic circles, the Old Testament, and the Torah. It's a tinsel-like thread that connects your soul to your body and once it's severed, you die. It shows the fragility of life. There's people who have died and had out of body experiences where they wake up and are floating above their death bed, and notice this tinsel-like silver thread connecting them and then it draws them back in and they wake up in their body again. It's this really cool analogy or metaphor for life and death and how quick and meaningless the in-between can seem. A lot of the songs flow out of that concept for sure.

inReview: How would you describe you sound or live show?
Matt: We try to have a lot of energy, we try to have depth, and we try to have fun. Our music, we don't try to keep it to any genre. We just try to make it mean something and have integrity. Hopefully it'll reach people who may never have heard our genre of music or our style. Hopefully, it'll transcend those boundaries. When my mom goes, "I like your CD," then I go, "Alright, we did a good job." I want everybody to be able to listen to it and understand it.

inReview: How does being on Tooth & Nail, a Christian label, relate to the faith of your band?
Matt: When we signed, they definitely wanted to know what our faith situation was. I grew up in a Christian family and so did Justin and Skip, and Robbie for the most part too, so we definitely have those roots. We think for the most part that there is a bigger purpose for our band outside of just making music. Definitely, if there is a spiritual meaning to our purpose to our music, we want to tap into that. We know that songs can change people and move people. I write from experiences, but there's always hope based on my faith and where I come from. This is also our first year doing the whole Christian music festival thing. It's been super awesome so far, the kids are really supportive.

inReview: What's in the future?
Matt: I don't really know what our future holds. Hopefully we have a hit record and we tour the world. But chances of that are slim. We just hope to make music as long as it makes sense and until we [no longer] feel called to do it. We're not going to stop until we feel like we're done.