Welcome to the World of Texas In July 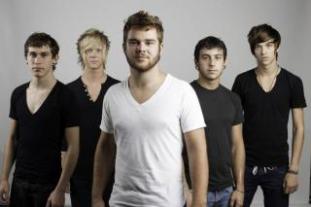 I can only imagine that a visit to Texas in the month of July would be rather hot. Coincidentally, the same could be said about the career of five teenagers from Ephrata, Pennsylvania. It’s every band’s dream: get some friends together while in high school, make some awesome music, land a record deal within two years, begin touring, and have a downright awesome time. Practically speaking, this doesn’t normally happen according to plan. But what if it wasn’t in the plan? “Basically we just did it for fun,” shares Logan Maurer, guitar player. “We’re blessed to have come as far as we have.” Logan, along with band mates Ben Witkowski on bass, Alex Good delivering sharp, brutal vocals, Adam Gray drumming away, and Christian Royer also on guitar, teamed up to form the one of the youngest hardcore bands on the Christian music scene today.

“When we first started, Ben said that he would kiss Logan’s big toe if we played the Chameleon [Club] one time,” Adam recounts. Considering they’ve played the renowned Chameleon Club in Lancaster, PA many times and are known to easily pack it out, I’d say that they’ve achieved their dreams – and are now on to bigger and better things. The guys signed to CI Records last summer (home of the famed hardcore act August Burns Red, who are also from Lancaster), which distributed their digital EP, Salt Of The Earth, in 2008 and will release their full length record this July. “For our new album, we’re trying to get into a little bit of everything, so that the kids can get into it thoroughly without it being one set style of music. We’re throwing in a lot of genres of hardcore and metal,” Ben shares.

With a band name that leaves much room for question, chances are that you’re wondering how it originated. “We were on a search engine for band names on the computer,” explains Adam. “And then he [Christian] randomly says that he’s been to Texas in July, so we were like ‘okay, let’s use it’!” The story goes though, that Christian originally thought of, “July in Texas,” but Logan quickly reversed it and the name stuck.

At the root of their brutal, heavy, hardcore songs lies an ardent passion to glorify God with their art. “We want people to know we are a Christian band,” Logan reveals, “but our whole thing is that we don’t want to push it on anyone. Our goal is to show that we’re kids in this scene that don’t have to do certain things to fit in and be cool. We believe in God, and this is what we do it for. We wouldn’t be doing it without Him. That’s our purpose.”

The future seems bright for this very energetic group of guys. “This summer we’re going to do a tour for two, probably three weeks,” shares Christian. They are also slated to play this year’s Purple Door Festival in Lewisberry, PA, a two-day music festival that features genres ranging from folk music to intense hardcore. They are very honored to have achieved a slot at this year’s festival. With the “HM Stage” open for both days this year, it is sure to spark the interest of countless metal heads. “We’ve always wanted to play Purple Door, especially since it is a large festival in our home state,” Alex excitedly says. “Bands that we’ve played with before have played there, like August Burns Red and Gwen Stacy. We’ve always wanted to play a festival like that. It’ll get some good exposure for us, and maybe lead to better things.”

Keep your eyes open and your ears attuned, because “better things” surely are in store for Texas In July. And in the meantime, be sure to check out www.myspace.com/texasinjuly for updates and their tour schedule. Also head over to www.purpledoor.com to check out the festival’s schedule, lineup, and ticketing info. Hope to see you there!