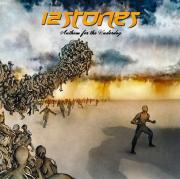 If nothing else, the latest 12 Stones release seems destined to send diehard fans scurrying to uncover the identity of the underdog mentioned in its title. Some will conjecture that it refers to the victims of Hurricane Katrina, which caused widespread devastation to the group’s hometown of New Orleans in August of 2005. Others will see it as pointing to the band itself which, despite a considerable fan base, lead singer Paul McCoy’s Grammy for his involvement on the Top 5 Evanescence single "Bring Me to Life," and opening slots for everyone from Daughtry to Creed, has yet to do business on the Billboard Hot 100 or watch its albums fly off of the shelves. More than likely, though, the namesake in question was inspired, as McCoy has hinted in interviews, to the universal theme of overcoming adversity, regardless of its form.

Whether a response to the aforementioned difficulties, the band members’ newfound status as parents, or simply the creative input of new guitarist/songwriter Justin Rimer, the new project is a good bit more subdued than its predecessors. The soft-verse/loud-chorus structure of “Lie to Me” mirrors much of the group’s previous post-grunge-influenced work, but its heightened pop sensibility and McCoy’s more careful attention to vocal inflection and shading allow the track to convey a wider range of emotions than merely the usual alienation and angst. “It Was You” leans equally toward the pop side of the pop/rock equation, thanks to its infectious melody line and soaring harmony work. The orchestral flourishes and muted electronic percussion that dot “World So Cold” lend the cut a pleasingly understated poignance. And McCoy’s tempering of rage with restraint renders the acoustically-based “Arms of a Stranger” simultaneously pensive and potent, making it one of his most compelling compositions.

Those worrying about the band having gone soft will be delighted to know that the lads from the Crescent City still pull deeply and often from the bag of hard-rocking tricks that made the first two records such bracing affairs. The aptly-titled “Adrenaline” is the sort of fist-pumping, head-banging anthem certain to elicit wails of delight from those in the Gen Y contingent as they go for one more round in the mosh pit. The dissonant, heavily-compressed guitar work of “This Dark Day,” on the other hand, will surely please those who bowed at the late ‘80s hair metal throne. The heavy, funk-infused “Games You Play” would fit comfortably on, say, a P.O.D. or Deftones disc. And the similarly first-rate “Hey Love” combines the most appealing aspects of Creed’s “My Own Prison,” Lynyrd Skynyrd’s “Give Me Back My Bullets” and Lenny Kravitz’s “Let Love Rule.”

As with any trip worth taking, the journey toward artistic individuality and growth has not been entirely without the occasional wrong turn. These missteps are mainly consigned to the lyrical half of the album, though, and even the unimaginative, often grandiose, language of songs like “World So Cold” (A stain covers your heart/ And tears you apart) and “Broken Road” (I won’t bleed for you anymore) is arguably no worse than that used by the majority of artists currently nesting in the modern rock Top 40. Likewise, rather than merely aping the angry, fist-to-the-sky attitude of the average post-grunge outfit or the unrelentingly forlorn outlook of their emo counterparts, McCoy and his cohorts have tied the songs on the new project together with an underlying thread of resolve, determination and, ultimately, hope. It is this willingness to navigate the proverbial road less traveled, together with the group’s broadening musical palette, which ultimately serves to make Underdog the quintet’s most ambitious, diverse and consistently impressive work to date.