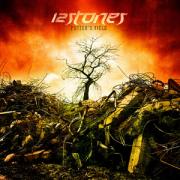 Once again I find myself writing about the return of a favorite band after what seems like a prolonged absence. I know I made a big deal out of the two years' gap between releases for Pillar, and I still feel that such a large absence from the scene is too long, but the anxiety was particularly acute with respect to 12 Stones's latest, Potter's Field. When you like an album as much as I like their debut, it's hard to wait for the follow-up. I wish I could say that my patience was rewarded, but that would be overstating the positives of the new project. Not to say that there aren't positives, just that they aren't as plentiful as I'd hoped.

The guys return from extended touring and, in Paul McCoy's case, guest work on other projects with a harder, if not cleaner, more mainstream sound. Though he still shares writing credits on the album, gone is former bassist Kevin Dorr (who was praised in Rick's review of the debut). His replacement, Greg Trammell, garners a good deal more exposure in the mix of the new disc, and this is the primary force behind the heavier sound. Unfortunately, until drummers go back to providing backup for the band instead of forcing themselves to the fore, we will continue to be subjected to the near-constant hiss of cymbals that seems to overwhelm the music.

The latest material draws heavily from the mainstream bands listed in the "Thanks to..." section, like Drowning Pool, Jerry Cantrell and Creed, among others. All of them contribute in some way. "Bitter" is perhaps the top pick, with definite influence from Jerry Cantrell (of Alice in Chains fame.) Immediately after "Bitter" comes "Photograph," a throwback track (can you say "throwback" about something two years old?) to the band's debut that incorporates a bit of Evanescence with a bare, melodic intro before taking off. Perhaps the best overall sound-alike comparison goes to Drowning Pool (on Sinner, not Desensitized.) Our band utilizes the same formula, with a number of slow run-in, high tempo pick-ups and screaming vocals. All of this "borrowing," in light of the band's contention that the first album wasn't indicative of "their" music, leads me to wonder if there is any originality lurking behind the formula.

One thing that hasn't changed is the willingness to address spiritual issues through their lyrics. Say what you want about their sound (and I guess I have), but the message is still mostly good, though occasionally melancholy. Opener "Shadows" reinforces the necessity to be strong against the tides of the world around you. "The Last Song" is an admission of the inherent weakness of man without God. While it is relatively slow when compared to the rest of the album, I thought it was a natural power ballad, given the personal nature of the lyrics, and as such, should have been even slower. Very 3 Doors Down-esque, "Stay" spells out how not hearing God's voice can lead to loneliness and uncertainty. The only questionable content comes from "3 Leaf Loser" where it says, "This life is a lesson / take what you're given / you don't need direction to find your way / don't you listen to yourself now and again." Perhaps I'm missing something, but it seems to point to a self-centered approach to problem-solving.

All in all, this is a respectable effort. Not as good as the debut, but still not what I would characterize as a product of a sophomore slump. I am hoping that we see some evolution to the sound of this band in the future, because while this has some new, there is mostly just somebody else's old.