The Light of Things Hoped For - Brave Saint Saturn (2003) 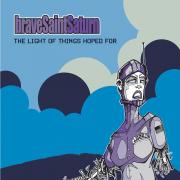 The Light of Things Hoped For is best described as a teenage rock symphony. Some may be shocked at this description, but there isn't any better label for Brave Saint Saturn's sophomore release. "Space rock," though a cool phrase, doesn't really fit the musical style—the songs may be space-oriented, but frankly, the music isn't electronic enough to acquire that title. Yet, The Light of Things Hoped For isn't merely a teen rock/emo-wannabe album that uses a lot of words to say "life sucks." Rather, it is an intelligent record that has a lot to say and says it well, which is why I dub it a teenage rock symphony.

For starters, this album is not simply a random collection of variously-styled songs that some A&R dude calculated to tear up Top 40 radio. On the contrary, these songs were carefully crafted by primary songwriter/vocalist Reese Roper and producer Masaki. Each song connects with the previous and following song, often with an invisible vibe that flows into your brain and unites the melodies into one, continuous work of art. Yet, none of the songs sound redundant: Roper and Masaki's musical skills are oft-utilized to throw in twists and climaxes where they are needed.

Similarly, each song's lyrics illustrate one mile in a journey towards hope. Using the metaphor of a spaceship in life-threatening danger (think Apollo 13), Brave Saint Saturn take us from sunrise to midnight to daylight, a progression filled with excitement, depression, intense fear, and jubilation. Little snippets of news reports and poetry readings are thrown in at key moments to set the stage and create the tension vital to the story's color. Meanwhile, every track has its own individual messages that should not be ignored. "Enamel," for example, reminds us not to allow our hearts to harden. On the opposite side of the spectrum, "Estrella" is a heartfelt lament over the frailty of faith and life. And though blunt, "Heart Still Beats" is a much-needed slap in the face over the way we often treat the lost.

The only complaint I have about The Light of Things Hoped For is that it's squarely aimed at teenagers, particularly those who are struggling with the changes that come with growing up. For those inside that category (and those who are able to push away the nostalgic nightmares arising from thoughts of adolescence), this is wonderful; for the rest of us, however, this album is quickly outgrown and relegated to the "I once liked this" shelf. Still, Roper and Co. have done a good job creating an album that grandly fills its place alongside of other teenage rock symphonies. After all, these symphonies don't come very often.