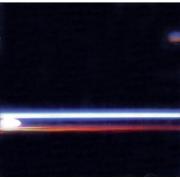 I picked up this CD for $2 at my local Christian bookstore. As I'm guilty of doing, I judged the CD by its artwork: streams of red and blue lights across a black background. I didn't even bother to listen to the already-opened disk, because I figured it was only $2. If it were horrid, I'd simply give it away.

To my delight, the talent present on the album is worth far more than $2. Denison Marrs is an intellectual band featuring rich lyrics and musical ingenuity. Holding Hands at 35,000 Ft. is one of the truest definitions of modern emo rock I've heard to date, and it holds a spiritual maturity that shines through the lyrics with crafted care.

A prime example of their uniqueness appears in the song "From the Centre." It begins with an astronaut-like sound almost resembling a vintage keyboard and tracks into digitally-delayed guitars and steady drums. Collins' vocals shine strong, singing, "Every single pulse / blinking from my centre / Welcomes you with no fear / Beckons you to enter." The rest of the album is equally diverse. More digital delay rings in "Heavy Laden," surging to loud rock and melting into legato lines of picked guitar strings. "Every Star" and "Oxygen" incorporate chunky guitars with a grunge-rock beat and balances it against softer moments. "Random" incorporates a semi-80's flare, and "Better 3/4ths" rings similar in beat to Relient K, yet distinct enough to remain separate from their sound. Ethereal ballad "Eyes Will Dance" rings with a tremolo collection of guitars and solo lines high on the neck. Throughout the offerings, Collins' airy vocals maintain strength in sound and pitch as the music rolls in waves across the sound spectrum. His voice remains distinct enough to relieve any sense of boredom—although true boredom can never be felt when listening to this record.

Many lyrics embrace a deep strength, adding a hint of spice to the already-tasty melodies. "Eyes Will Dance" begins, "Take my hand / Join me in this celestial dance / I'm only brave enough to ask / Because I already stole a glance / And I saw me in your eyes." Images of heaven and other-worldly places comes in "@ 35,000 ft," where Collins sings, "I'd pull some atmosphere / Over our shoulder and / Settle in for a nap." "Oxygen" asks for one more chance to be embraced by a Savior: "Can't you feel me / Gasping for just / Once more from your / Oxygen lungs filled / so pure?" While the dominating art is the music itself, the few lyrics that do exist contain a pop and sparkle seldom seen in other projects.

Perhaps it's near impossible to find this record anymore. I, for one, never heard it mentioned in the music industry. Yet Holding Hands @ 35,000 Ft. deserves an abundance of attention. Fans of the modern Denison Marrs need to explore the roots—roots that extend deep into artistic experimentation and tap into a hidden spring many artists never taste.

Can I say this was the best two-dollar investment I've ever made?