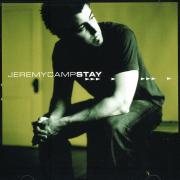 It's not easy to admit, but the fact is, the world is going pop. The promise of radio success is now contingent on a singsong chorus that forces a rock band to pick up a certain "edge." Whether it's smooth R&B vocals like Wave, Sum 41's watered down punk rock or nu-metal music that would depress even Eddie Vedder, everyone now needs an edge, leaving fewer and fewer hard rockers out there. Can rock and roll survive? Jeremy Camp would say yes. Not only is his debut album Stay straight up rock, but his lyrics leave traces of his heart all over the listener's ear - a gift more valuable than a rock and roll disc.

Producers Adam Watts and Andy Dodd serve as the basic bandmates to Camp's acoustic guitar and near-perfect vocals. One through twelve, the songs on Stay range from average to excellent on an album worth several replays. "Understand" introduces Jeremy as a crooner, dipping into Scott Stapp territory. However, at no point does he sound like an imitator rather than an original. The diversity of the songs paves the way for many musical influences such as Lenny Kravitz ("All The Time") and Nickelback ("One Day At A Time"). The hardcore sound is even mined as Jeremy screams through the chorus of "Take My Life." The intimate, 3/4 ballads "Walk By Faith" and "I Still Believe" serve to round out Camp as an attentive and thoughtful songwriter.

The entire album reads like a journey through Camp's life as he shares his experiences in the hopes of encouraging Christians. Each song is ordered in such a way to raise questions about how they relate to each other. "Understand" is painful self-examination in dealing with the feelings that come with committing a sin, while the next song "Right Here," is a strong profession of faith that God is always near to us. "Walk By Faith," the third song, takes the concept even further with Camp stating he will "Walk by faith, even when I cannot see." The album continues this way, with each song remaining distinct, yet hinting at its relation with the others. Struggling friends are given a simple encouragement message in "Stay" and the love of God is thought upon in the upbeat "All The Time." Jeremy once again reveals the struggles of the Christian walk in "I Still Believe."

"Scattered words and empty thoughts/ Seem to pour from my heart/ I've never felt so torn before/ Seems like I don't know where to start/ But it's now that I feel your grace falling like rain/ From every fingertip, washing away my pain."

The inspired writing of "I Still Believe" allows the listener to relate to many emotions, but musically, the song is unfortunately similar to "Walk By Faith."

Camp's lyrics are straightforward and sometimes borderline Christian cliché, but the heart behind them is very genuine, which makes Stay a very enjoyable listen. Excellent songs include "Understand," "I Still Believe," "Right Here," "Stay" and "Take My Life." The two average tunes "Nothing" and "I Know You're Calling" are enjoyable but might get skipped over in repeated rotations. The rock fans will love this disc and should extend sincere thanks to Jeremy Camp for leading a new generation of Christian rock music.