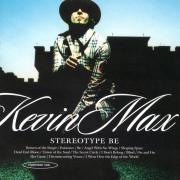 Picture an average kid, Daddy in tow, squirming as a new animated movie begins. He’ll laugh at jokes, jump in Dad’s lap during scary parts, and be terribly surprised at every twist and turn. Contrast him with internet-savvy Junior sitting nearby, a boy who knew the movie’s plot, minor characters, and insider-jokes-to-watch-for weeks before it released. Sure the whiz kid invested more time into the experience, but who got more joy out of it?

There’s a lot to be said for discovery. Kevin Max gives us a mouthful about it in his solo disc Stereotype Be, a reference to how Christians are called to live out overused sayings (“Love goes on and on,” “I’m blind,” et. al). Producer/arranger/sitar player Adrian Belew influences the work heavily, though Erick Cole contributing to six of thirteen songs must factor in as well. Track one subjects listeners to the “Return of the Singer,” Max’s glorification of performance as freedom; not that “pretending” is a good thing in relationships, but the art of posturing and being pressured can be a good release. It requires some thought, which is a common need in enjoying this Cd. Being a radio single, “Existence” is straightforward enough – the lyrics anyway. Volumes could be written, however, on the song’s luxuriant style, boiling Far East and American sounds in a soulish stew kept piping hot with disco guitar (George Cocchini) and a smooth rap (via GRITS member Coffee). Could personality, peculiarity, and poetry be some things “freely given to us by God”? Though sounding scandalous at first, the theology of “Be” finds support in I Corinthians 2:12 which draws a fine line between the world and God’s Spirit. Killer hooks and conspicuous contrasts carry an “Angel with No Wings,” a rambling ditty that resembles its follower “Shaping Space” in working through another day’s horror and humor (the latter makes an observation or two regarding testimony and its purpose, but that need not be expanded). Only Kmax could get away with using “don’t wanna” and “blessed suspension” within the same song: the Mark Townsend co-write “Dead End Moon” has a speaker suffering with pale skin and a “growing weakness,” symptoms of his fascinating, incurable disease.

“How can I bleed my sorrows and you hide your accomplishments?” Piercing the mind and emotions with bleak, biting stanzas, Max’s soliloquy “Union of the Soul” has more effect than perhaps a hundred songs. Number eight on Stereotype Be, “The Secret Circle,” is open to interpretation by all accounts; some think it concerns a prostitute, others lean towards a metaphorical pattern of stitched truths. Called by its author “A song on how I felt about the music industry and my role in dc talk,” the misfits anthem “I Don’t Belong” clearly comes from a singer accustomed to lambasting critics and choosy fans. Bass by Tony Levin and John Painter’s string arrangements keeps “Blind” from being sonically paralyzed, bringing a message on carnal urges that many won’t swallow well. Beginning at that cut’s 3 min. mark, some of the album’s cleverest material comes to light. Fulfilling the Ecclesiastes 9:9 mandate (“Live joyfully with the wife whom you love…”) an acoustic trance draws listeners into a private story “too old to know it all” called “On and On.” “Her Game” turns around the previous track’s subject, feeling how lost love taunts with “little smiles [that] turn my stomach” (notable rhyme: Memorex/confess). To moan over Hollywood superstars seems pointless but “Deconstructing Venus” sees these people as casualties, “the eye of the storm” in a lightning-charged societal climate.

By this point, most are ready to take the song title “I Went Over the Edge of the World” as a literal verdict on its writer. Yet that poem itself clarifies his position adeptly by seeking white in a gray-painted world (very arty technique, keeping drummer Matt Chamberlin and the band playing throughout). If nothing else, “You” finds Kevin clearly in the Christian camp praising the Father for rescuing and comforting him. It’s difficult to give Stereotype Be a hard-and-fast appraisal; Kevin Max simply sought to portray imperfection, and he did so -- “No joke, no trend, no fad of the week.”