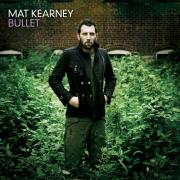 There have been many musical fusions and marriages of styles in the world of rock and roll. Recently we have seen the success of the forced union of rock and rap oversaturate the industry to nauseating levels. It was only a matter of time 'til the "genre" would be given an extreme makeover and reemerge as a polished masterpiece. Enter Mat Kearney ...maybe. With a deep appreciation and regard for the culture of hip-hop, rather than re-birthing an illegitimate step-child of musical lust, he creates a sound unlike any other. Using hip-hop as his canvas he paints a musical picture using Brit-pop, folk, rock, and spoken word as his colors of choice. The result is the debut full length recording, Bullet; a wonderful working of musical diversity.

Immediately upon inserting the CD into your playing apparatus of preference you will be introduced to the formula that makes Bullet so successful: rap/spoken word verses over live drums and simple guitar riffs. In this case successful also can be, at times, interpreted as repetitive. "Trainwreck" and "Undeniable," the album's opening tracks, are undeniably simple lyrically and are almost indistinguishable in sound. It is not until the third track that we are able to see this simple formula actually work. On the title track, Bullet, we hear what distinguishes Mr. Kearney from Mr. Wright — content. Starting here at track three, the lyrics progressively get better and better. "Girl America" includes a very real commentary on the youth of this society. My only wish is that those who are in position to make a difference do so when they hear this song rather than just hum along.

"My girl, she's at a crossroads, people praying for her
Some are preying on her; magazine ads, sex, drama
Smoking marijuana, longing for a father to call her 'daughter'
She's part of a generation longing for reconciliation
And this future that they're facing and this poison that they're tasting
My girl, I know this love that you're chasing"

These lyrics are a subtle reminder that everyday life for teens is a battle for the mind, and that when fathers are not fulfilling their Biblical responsibilities to their children, love and attention are sought elsewhere.

Bullet is its strongest during the second half. When a singing Mat opens "In the Middle" at once you know this song is going to be solid the whole way through, again, the content is so vital here; whereas in the beginning of the CD we were force fed corny hooks and bland lyrics, the later half ushers in brilliant chorus and meaningful lyrics that are beautifully sung. "Call Me" easily steals the spotlight here; Mat picks up a triple double on this little ditty. The use of the harmonica is what really pushes this song from being pretty good to brilliant.

A good friend of mine described Mat Kearney as mix of Coldplay and G. Love and Special Sauce. That would be over simplifying it, though. It is true that there are similarities between the aforementioned artists in various areas of Bullet; but I believe that Mat has been able to define his own sound. While many artists struggle through several sub par albums to try and achieve their identity, Mat has done so on his debut. I highly recommend this CD to all of my diehard hip-hop friends as well anyone who enjoys exceptional music. Mat has delivered the silver bullet to the beast that was killing originality, creativity and beauty in hip-hop and music in general.