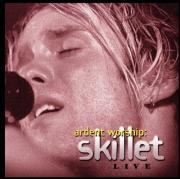 First it was only wishful thinking. Then came the rumors. And finally there was word from the band themselves. Skillet was making a worship album. An idea pre-conceived even before the release of Hey You, I Love Your Soul, Ardent Records has finally made possible what has been the longing of the group and its many devoted Panheads for quite some time. Move over, Matt Redman. Here comes Skillet.

Ardent Records' Skillet Live kicks off with the feisty opener "Who Is Like Our God?" Although kind of monotonous after 5 minutes of hearing "Great is the Lord King Jesus" in John Cooper's wailing vocals, the song has the trademark Skillet sound with just as much of a worshipful feel as anything SONICFLOOd could crank out. "Your Name Is Holy" is more electronic than its predecessor but could still manage to get hands raised from the crowd as the band chants "You are the sovereign 'I Am' / Your Name is holy / you are the pure, spotless Lamb / Your Name is holy." Suddenly the loudness comes to a halt on track #3, "How Deep the Father's Love For Us." As the worship calms to a dull roar, Skillet pour out their heart about God's amazing love for all of us, despite the fact that all have sinned and fallen short of the glory of God. "We're Thirsty" is the one-minute follow up to the preceding track and sounds like a spontaneous, spur-of-the-moment clash of vocals and electric guitar, yet reverent in its own right. Just when you think Skillet is going to calm down, they raise the roof once again with "Jesus Be Glorified," a hard-rocking track that does exactly what its title implies; pulse-pounding drums and bass beyond belief included. The experience gets even better on track #7, "Sing To The Lord," which challenges listeners not to be afraid to make a joyful noise when worshipping God. It sounds much like "I Trust You" from the Invincible album and also features synthesizers for the first time on this worship CD. Remember the semi-hidden track "Angels Fall Down" from Skillet's Invincible project? It's also featured on the live disc in all its 8-minute entirety. The lyrical harmonies between Cooper and his wife Corey are incredible. "Safe With You" goes even further back to Skillet's first release, but it's done in a new, electric style and applied to a worship theme that adds more depth to the song. "Safe With You" also puts the listener in the perfect mood for the coupe de grace--you guessed it--"Shout to the Lord." If you've never heard "Shout to the Lord" Skillet-style, you're in for a treat. The synth keyboards add the perfect touch to this popular worship tune, and the band harmonizes extremely well on instruments and vocals alike. So ends Skillet's tribute to Jesus.

The worship experience doesn't end with this one album, however. One thing Skillet has always wanted to do is make a worship album, and this project is the result of their attempts in that direction. Even though they can be loud and just downright scary sometimes, Skillet's studio cuts can be just as worshipful as this album when you focus on the purpose of why they write the music. Skillet has a true heart to serve God and reach the lost. This album is simply evidence.