Things You Can't Stop With Your Hands - Tara Leigh Cobble (2006) 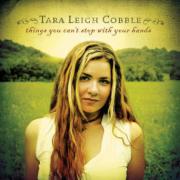 If indeed God's pursuit of us can be termed a "Sacred Romance," asthe title of Brent Curtis and John Eldredge's book suggests, many of us who are dudes balk at the "romance" part. The notion that God seeks us like a smitten lover may captivate the hearts of our sisters, wives and girlfriends, but on the masculine breed the effect is simply lost.

To us (to me, at least), Jesus is a buddy. The Father is an old man with a beard who loves us with a certain detachment and sternness. The Holy Spirit is harder to comprehend, but we don't see Him as someone who wants to hold our hand and whisper sweet nothings in our ears. There's something in us, whether it be the way we're wired or a touch of homophobia or both, that simply stands in the way of our seeing God this way.

On things you can't stop with your hands, an exceptional album from Nashville-based singer-songwriter Tara Leigh Cobble, however, this concept is embraced wholeheartedly. Woven between songs about human-to-human love and all of its trappings are those that picture the Creator as someone who plays hard to get and can be the source of adventurous, wild and untamed living. For Cobble, God is a "smiling love" â€“ a "rugged warrior" â€“ who is "reaching just to kiss [her] face."

Cobble delivers each song with a voice as bold, arresting and beautiful as her poetry, sounding vaguely like a brasher Sarah McLachlan at times and, as one newspaper has pointed out, like Sheryl Crow at others. Lyrical complexity is evident in some songs, but on radio-ready cuts like "White T-Shirt," "Damage" and "Beautiful Drive," the singer is able to craft tremendous, cloud-scraping choruses with as few as five frequently repeated words.

"I Wonder" is perhaps the most heart-rending offering on an album that is full of them. Here, Cobble thoughtfully contemplates the possibility that (among other things) Christ's heart broke as He worked as a carpenter, driving nails into beams. She grasps the irony of His carpentry and muses, "I wonder if He ever thought, 'A nail like this will beâ€¦the death of me.'"

Songs about earthly lovers are equally as affecting and articulate. "Every Girl I Know" speaks of a philandering lad who treats women as trophies, leads them on and then discards them with words like "I don't love you," or "Honey, we should just be friends."

"Every girl I know is the unwitting root / That feeds your deepest needs," Cobble sings. "You keep them close, just to sap their strength / 'Till they don't have the strength to leave / Every girl I know holds to reckless hopeâ€¦ / But every heart breaks in the end."

The aforementioned "Hard to Get" is another lyrical gem that mines with more frustrated honesty than many artists the feeling that God can seem silent and distant at times: "Do You remember when You lived down here where all of us scrape / To find the faith to ask for daily bread? / Did You forget about us after You had flown away?"

That sounds heretical, but the song ends with the conclusion that God has "been here all along, I guess." Cobble realizes, "It's just your ways, and You are just plainâ€¦hard to get." (Meaning hard to understand.)

"Back When (You Used to Adore Me)," the final song on the album, leaves hints of cynicism and bitterness, as Cobble quotes an unnamed philosopher who decides, "Love is such a weakness / It's better not to fall." In the context of the rest of the record, however, this sounds as though it was written in the wake of an encounter with the ugly side of earthly love, not truly believed and espoused.

In the end, things you can't stop with your hands is a wonderful, brutally honest, lush and (to borrow a phrase) achingly beautiful album that needs to be in your collection. Even if you're a callous, Hummer-driving non-female type with machismo coming out your ears, the experience can be a pleasurable one. Dudes may never see God the way women do, but with Cobble's help we might come a little bit closer.